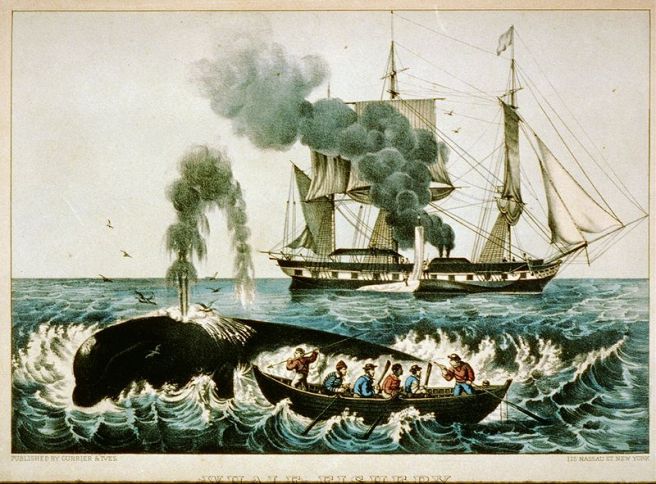 While today (in most parts of the world) whaling is thankfully banned, in the past, whaling was an occupation that was carried out regularly. Whales were hunted to extremes for their blubber, oil and bones. Western Australia was no exception with whaling being an early industry in the colony. Early accounts indicate great excitement at whales being killed and reports were regularly printed in the papers. On 2 September 1843, the Perth Gazette and Western Australian Journal printed an article recounting the news for the whaling industry for the previous fortnight. They then went on to describe “a curious scene” in Fremantle.

Numerous whales had been attacked by the whalers however it was reported that one of them had been harpooned and then managed to pull away, dragging the boat and its occupants with it. Near Straggler Rocks it began to dive and the whalers in the boat had no choice than to cut the rope attached to the harpoon.

Thinking that they had lost the whale, the whalers returned to shore. A few days later news soon spread that the whale had in fact died from its wounds and had been found washed up on North Beach, located a few miles from Fremantle. The whalers gathered what they needed and headed straight to the beach, hoping to recover as much of the whale as possible.

Meanwhile, news also reached Perth of the whale on the beach. The fascination at seeing a whale close up was too much for some and as it was only an hour’s ride from Perth to the Fremantle area, many people took off on their horses to catch a glimpse of it. One amongst the group was a young man, suitably nicknamed ‘Jonas’ by the paper, perhaps in a bid to protect his identity.

‘Jonas’ arrived and noticing that the first spade was about to be dug in, decided to seize the opportunity of being first for himself. He jumped on top of the whale and dug in his spade, only to be met with an almighty explosion! There was nowhere else for ‘Jonas’ to go but down into the rotting belly of the whale.

Initially everyone laughed at his predicament but seeing as though ‘Jonas’ was struggling, they quickly went about undertaking the difficult task of rescuing him from inside the whale. ‘Jonas’ was safely returned to land unhurt but left in a rather putrid state.

4 thoughts on “‘Jonas’ and the Whale”

If you love the stories on The Dusty Box, please consider making a small donation to help support the site.