During the depression years of the 1930s there was general concern that Australian children weren’t getting enough nutrients in their diet. In order to combat this, Thomas Mayne (the chief industrial chemist working for Nestle) set about working on a new product.

It reportedly took him four years (during which time he worked up to 80 hours per week with his wife, Dorothy) to come up with the winning formula which would ultimately become Milo. He combined malt extract (obtained from malted barley) with full cream milk powder, cocoa, sugar, mineral salts, iron and vitamins A, D and B1.

I attempted to develop a completely balanced food drink which contained all the necessary proteins and minerals.

The product initially starts its life in liquid form and is then dehydrated using a vacuum dryer. Once the liquid has evaporated, the solid particles (in differing sizes) remain. These particles then pass into a hammer mill where they are broken up into smaller grains and then finally packaged into tins.

A name for the new product was of vast importance. Nestle wanted to make sure that its name reflected the aim of the product (to build a strong, healthy body and give energy) and so they settled on Milo; naming it after the 6th Century BC Greek wrestler, Milo of Croton who was known for his strength.

Production officially began in Smithtown, New South Wales, and the product was launched in 1934 at the Sydney Royal Easter Show. It was first known as Nestle’s Milo Fortified Tonic Food.

While a lot of the earlier advertisements (on Trove) were printed by separate stores as part of the particular products they stocked (as shown above) in 1946, Milo printed their (from what I could find) first full page ad in The Australian Women’s Weekly. With the ad running during summer, they made sure to tout its refreshing qualities on a hot day. 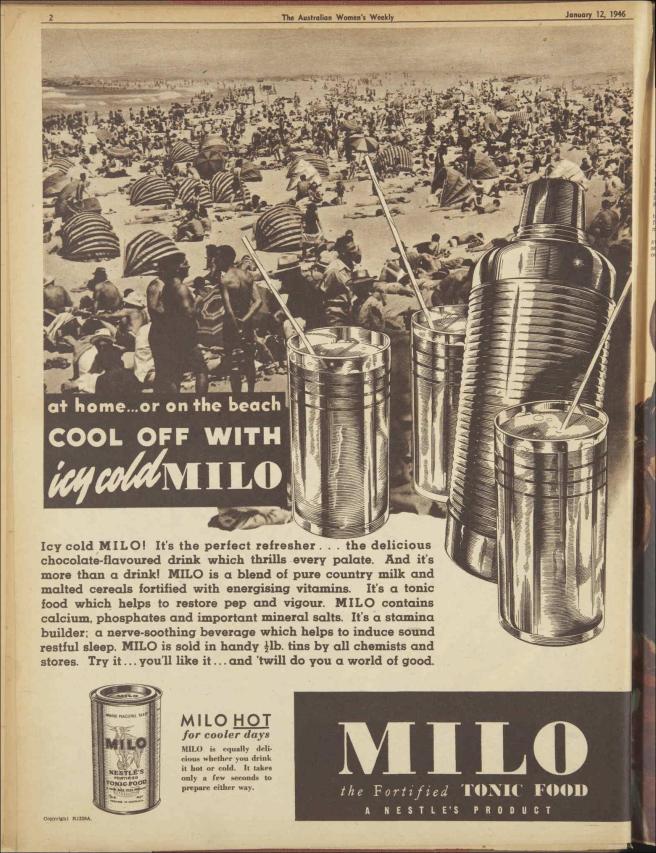 By the middle of the same year however, they were printing a different type of advertisement.

Due to the steel strike in the USA during 1946, Australia received no tinplate imports and the stocks within the country became dangerously low. Australia during this point in time had a very large canning industry and, to protect our exports (and especially our contracts to Britain) a restriction was placed on the use of tinplate. In order to do their bit in conserving tinplate, Nestle decided to sell their tins of Milo without the outer lids.

In the following years some rather stunning ads were printed in The Australian Women’s Weekly, all of which stressed the benefits to your health from drinking (or eating) Milo regularly. More often than not, it was recommended as a bedtime drink in order to aid sleep.

Between 1957 and 1959 the product packaging and logo (which previously appears to have featured a bull behind the name) was re-branded to the packaging we are familiar with today. It’s still called Milo and it’s still owned by Nestle. It’s also still advertised as an energy food/drink that provides nourishment and nutrients to both children and adults alike (http://www.milo.com.au/nutrition/).

It was a complete success when it was introduced in 1934 and only gained in popularity in Australia. Figures from a 1994 edition of The Canberra Times indicate that at that point in time it was sold in 30 countries with world-wide sales of 90,000 tonnes.

And what did Thomas Mayne think when he first tried Milo back in the 1930s?

The first batch was the sweetest thing I’ve ever tasted.

I’d have to agree with him.

6 thoughts on “Milo is Better for You!”